Hey Dad, Can I Get an Advance on My Inheritance? 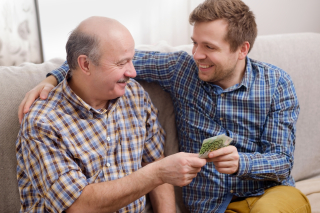 Most parents want to divide their estate equally among their heirs, but sometimes things just don’t work out that way. That’s especially the case when one child needs more help than another. Therefore, what parents will often do is count the distributions they make during their lifetime as advances against the child’s future inheritance. This doesn’t always go smoothly, says the article “Lifetime advances of inheritances” from Lake County News.

Equalizing distributions to some children to offset any substantial distributions made to offset the total distribution can lead to trouble, if certain legal requirements are not addressed. In California, the Probate Code is very specific. There are three different approaches in which lifetime distributions are counted as advances of inheritances at death:

In the first example, the decedent’s will, or trust expressly says that lifetime distributions are to be counted against the future inheritance. This may state a specific dollar amount or may refer to a ledger that tracks ongoing lifetime gifting. The ledger approach is often used when a child is dependent upon a parent for ongoing support, paying off school loans or paying a mortgage.

The second example, which involves a written record of the gift, was the subject of a recent appellate court decision. The deceased father kept track of all monetary gifts to his children. The father’s bookkeeper maintained a spreadsheet and was told by the father that the list was important, so that the payments would be deducted from inheritances. At the father’s death, the son had received more than $450,000 more than the daughter. The son contested the daughter’s request for equalizing the inheritance based on the ledger. The appellate court stated that the ledger met the requirements to serve as a contemporaneous written record. The court also found that the permanent ledger was property authenticated and entered into evidence, based on the daughter’s testimony that she found the ledger among her father’s papers and that it was written in her father’s handwriting.

In the third scenario, where there was a written acknowledgment by the person receiving the “advance” that the money was in satisfaction of the at-death transfer, the court found that the requirement was satisfied and the son had acknowledged that the assets given to him were advances on his inheritance.

A better scenario, and one that would have prevented some, if not all, of the litigation described above, would be to have estate planning documents that clearly state whether any disproportionate lifetime gifting to beneficiaries is to be offset with equalizing payments to the other beneficiaries at death. Your estate planning attorney will be able to create the best plan if your heirs need financial support, following the laws of your state.