Twelve Years and No Resolution to James Brown Estate 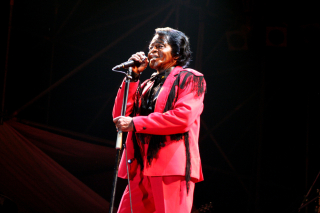 A federal court is now making the decision about who should receive millions in song royalties from the estate of James Brown. When the Godfather of Soul died, he was married to Tomi Rae Hynie, and the couple had a child named James Brown II. Or maybe not.

The Hollywood Reporter’s recent article, “James Brown Family Feud: Inside a 12-Year Fight Over Bigamy, DNA Tests and Copyright Law,” reports that in the 12 years since Brown's death, these questions still plague a South Carolina probate court that must determine how to divide Brown's assets. So far, Hynie and James II have succeeded in overcoming challenges to their assertion of being the surviving spouse and legitimate son, respectively. That puts them in position to collect a large part of Brown’s estimated $100 million estate.

However, there’s more to the story and the fighting. Nine children and grandchildren from Brown's previous marriages recently filed a lawsuit alleging dishonesty on the part of Hynie and the administrators of the estate. This new case deals with Brown's copyrights and may move the estate battles to a federal court, which usually has exclusive jurisdiction over copyright matters.

Tomi Rae Hynie is a former Janis Joplin impersonator in Las Vegas. She became a backup singer for Brown and eventually, in 2001, his fourth wife. However, when she married Brown, she was already married to Javed Ahmed and had been since 1997. In turn, Ahmed had his own secret: when he married Hynie, he already was married to at least three other women in Pakistan. Ahmed told her about his wives after the ceremony and disappeared without consummating the marriage. He really was only looking for U.S. citizenship.

Hynie had her marriage to Ahmed annulled in 2004, but by that point her relationship with Brown had become tumultuous. Hynie and Brown got into a physical altercation, and he was arrested for domestic assault, which led to a separation. Brown then sought his own annulment, and she countersued for divorce. The question of whether the two were truly legally married wasn’t resolved at the time. Right after the separation, the couple told a court, of a settlement wherein she would waive any claim of a common law marriage. Hynie says she then reconciled with Brown, and they lived together until he died. However, Hynie was included in Brown's will because he never updated it during their relationship. She asked to correct this at his death.

James II also wasn't included in Brown's will. The questions regarding his lineage arise from the notion that in the 1980s, Brown had a vasectomy specifically to avoid paternity suits. James II was Brown's only child born after that. But James II proved himself to be Brown’s son after taking not one but two DNA tests.

The nine heirs of James Brown filed their case in California and accused Hynie of having "embarked on a series of duplicitous business machinations calculated to deprive Brown's children of their rightful interests in Brown's music under the Copyright Act."

The issue of Brown’s music deals with an increasingly important part of copyright law known as termination rights. In the 1970s, Congress extended the copyright term, and lawmakers elected to recognize that many who had created works at the early stage of their careers had assigned rights to publishers without much bargaining power. Therefore, these songwriters or their heirs were allowed to terminate those deals 35 years after their work was published and reclaim rights during the later years of the copyright term.

As a surviving spouse, Hynie would be entitled to 50% of the termination interest, with the other 50% shared by the surviving children (or grandchildren if the child is deceased). Because of her large stake, Hynie is in position to veto any effort to reclaim song rights. If there's no termination, under the existing song publishing agreements, the song royalties go to the estate. Those monies would then be distributed in accordance with Brown's will and any court-ordered alterations. Before he passed, Brown earmarked some of his estate to go to charity. The estate stipulated that the motive was to donate money for scholarships to needy children, however, "to date not one penny has been available for those scholarships, because the probate litigation has continued."

The complaint says that starting in 2013, a consultant for the estate tried to get the children to sign away their copyright termination interests for cash. "Defendants deliberately concealed the underhanded nature of these proposals by orchestrating their pressure campaign through go-betweens, who falsely professed to be working in Plaintiffs’ best interests," the complaint alleges.

At the same time, Hynie and James II served notice on Warner/Chappell Music, the publisher and rights holder of James Brown's back catalog, that they were exercising termination rights on 138 of Brown's compositions. They failed to inform the other heirs.

The complaint further states that Hynie reached a $1.875 million deal with Warner/Chappell in 2015 to transfer back rights to five of the songs. The suing children say the deal was written in a way that leaves a royalty structure intact that favored the estate to the disadvantage of Brown's children. Hynie is, in effect, being accused of trading away the family's copyright termination powers. The children and grandchildren are upset by the deal, which leaves them out of the money.