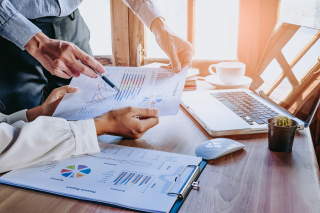 In the best-case scenario, you’d start talking with your estate planning attorney early on about your overall goals and the various tools available to minimize tax liability and transfer wealth to the next generation. Whether your estate is modest or significant, the article “A Recipe for Risk—Last-Minute Tax Planning for Estates” from The Legal Intelligencer explains how a last-minute plan failed on a grand scale. A recent memorandum opinion from the U.S. Tax Court provides a cautionary tale.

Howard Moore owned a large amount of property and ran a successful farm. He was admitted to the hospital late in 2004, was discharged to hospice and told he only had six months to live. He created an estate plan that included a family limited partnership (FLP), a living trust, a charitable lead annuity trust, a trust for the adult children, a management trust that acted as the general partner of the family limited partnership and an “Irrevocable Trust No. 1” that was created to act as a conduit for the transfer of funds from the FLP to a charitable foundation.

The primary focus of the plan was to transfer the farm to a living trust and then to transfer 80% of the farm property to the FLP. The management trust was to serve as a partner to the FLP, with the living trust owning almost all the limited partnership interests and with each of the decedent’s children owning a 1% partnership interest. The FLP was to offer protection against liabilities from the use of pesticides, potential bad marriages, creditors and the fact that the family was a bit dysfunctional and would need to work together to manage the FLP. The FLP had many transfer restrictions and the limited partners were not given any rights to participate in business management or operational decisions regarding the FLP.

The trust known as “Irrevocable Trust No. 1” was nominally funded at the time of the decedent’s death and received funding from the FLP. Those funds, in turn, were transferred to the charitable trust to gain a charitable deduction by the estate. Just before he died, Moore used FLP funds to make large transfers to his children that were designated as loans. He also made outright gifts to the children and to one grandchild.

The estate filed an estate tax return and a gift tax return after Moore’s death. The IRS issued a notice of deficiency for nearly $6.4 million and the case went to tax court. The U. S. Tax Court agreed with the IRS’ findings. The defense of the estate plan, the tax court maintained, was form over substance and the only reason for the estate plan and the numerous transactions was to save estate taxes.

There were a lot of hurdles in this case, in addition to the short time period for the estate plan to have been created. At the time of the decedent’s hospitalization, the sale of the farm to a neighbor was being negotiated. A contract to sell the farm was executed with days of transferring it to the living trust. There were numerous transfers and distributions made between trusts and the FLP, and the court concluded that all decisions about the FLP after its formation were made unilaterally by the decedent. An FLP is supposed to function as a true partnership. Many other issues and errors occurred in the rush to have this estate structured in such a short period of time.

Had Moore engaged in planning five or ten years earlier, there would have been time to create a plan in which both the substance and execution of the plan were sound and the family would have been able to save millions of dollars in taxes. By waiting until his death was imminent, the plan attempted to establish transfer requirements without the opportunity to execute them properly.

Reference: The Legal Intelligencer (May 18, 2020) “A Recipe for Risk—Last-Minute Tax Planning for Estates”